I think we’re all agreed that the article that Nico Hines wrote for the Daily Beast, in which he claimed to have used Grindr to arrange three dates with Olympic athletes, was very bad, homophobic, and put the lives of at least one Olympic athlete in very real danger. There have been a lot of responses to that (my favorite being Rebecca Shaw’s for SBS) so I don’t think I need or want to add anything there.

I’ve been more interested in the response from quite a lot of gay men on Twitter suggesting that Nico couldn’t possibly have got enough interest on Grindr to arrange three dates, simply because of his physical appearance. I’ll be fair, Nico isn’t smokin’ hot. He’s not the toned, bronzed Adonis that the stereotypical gay man seeks. And too, Grindr is full of generally dreadful men who body shame and won’t even have a conversation with anyone who isn’t toned, tanned, and under twenty-two. (I won’t go into the very real issues of racism here, but they deserve at least a nod.) And many of these men have taken to Twitter to express their dismay at the mere thought that someone who looks like Nico Hines would ever be contacted by anyone on Grindr.

In reality there’s every chance that Nico got three dates in an hour, and for lots of reasons.

For a start, beauty and attractiveness are very subjective. True, Nico isn’t the conventional ideal male body, but not everyone’s ideal is the conventional ideal. I’m sure plenty of men find Nico perfectly (at least physically) attractive – and I’m sure even some Olympians would. Hell, aside from those gay men who exclusively date people who look like themselves (and I refer you here to one of my favorite Tumblrs), what we, ourselves, look like doesn’t have much of a bearing on what we find attractive.

Looking deeper, and beyond attractiveness, there are other reasons Olympic athletes might get in touch with Nico to arrange a hook-up. Nico himself revealed that some of the people he connected with on Grindr were from countries where being gay is dangerous or illegal. And even in the world of sport, being gay means you mightn’t have the easiest time. So a a good proportion of male Olympic athletes looking for sex with men in Rio will be on the down low. Nico’s clearly not an Olympic athlete: he’s removed, so anyone really trying to stay on the DL might feel safer with him; might feel like this could truly be an encounter that would not ever come out; might feel like this could be something completely deniable with someone totally unconnected. This makes Nico’s actions all the more abhorrent, but it does explain a potential reason why Olympic athletes might have contacted him: when safety is a primary concern, physical attraction might not be.

Laws, culture, and safety concerns also mean that gay male Olympic athletes from certain countries might not be getting laid that often. Or at all. For them, maybe being in Rio for the Games was their only real chance of guaranteed sex with another man. Maybe a once in a lifetime chance. Maybe in their minds they couldn’t risk being picky; they couldn’t risk rejection from the ultra-toned stunners. They had a couple of weeks to get a shag and then perhaps never again. So they may have seen Nico as a sure thing. Someone who would almost certainly say yes.

A lot of discussion about Nico’s face, body, and overall appearance however, erases a sizable section of gay male sexual culture – one that involves dark rooms, glory holes, cottages, blindfolds – one that is truly anonymous, and one that doesn’t care about physical beauty or ideal bodies: it cares only about cock. It’s blunt, but it rejects heterosexist norms about courtship, romance and attraction and is all about animalistic sex. In that culture Nico’s appearance is irrelevant. His body shape, size, and tone are irrelevant. Every feature of his face is irrelevant. The only part of his body that is relevant is his cock. It’s not a culture we’re all part of, but it’s one that is valid and worthy of celebration.

I wanted to know for sure if it could be possible to secure three hook-ups in the space of an hour on Grindr without being conventionally attractive. I wagered it would be possible with an almost blank profile. So I set one up. And waited. 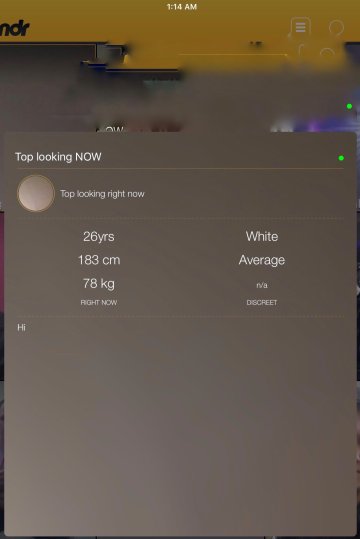 I put in some limited details, left out a photo and waited. Within five minutes I had three messages, all from men looking for casual sex immediately. (Note I’ve distorted the images for privacy.)

Within ten minutes I had eight messages. I didn’t respond to the messages, and I deleted the profile straight away, but I could very easily have turned at least three of those into fake hook-up appointments with an hour, just like Nico did.

Nico Hines’s actions were disgusting and harmful, but our response shouldn’t be this self-loathing body shaming. Of course Nico could have got laid in Rio – because men who have sex with men like having sex with men.