In a previous post I discussed my love of tea, and what is the perfect accompaniment to tea? Biscuits, of course! Dunkable or otherwise, a cup of tea and a biscuit is always delightful. Happily, that is equally true in Britain and Australia: tea and biscuits. I suppose it does make sense, rather than being an English curiosity. Even more happily, the blends of tea that are available are pretty much the same: English Breakfast (and the similar (and I hope ironically named) Australian Afternoon), Earl Grey etc.

However, the varieties of biscuits are vastly different. I’ll be blunt: I don’t really like Australian biscuits (bar a couple). I’m not sure if that’s because I genuinely don’t like them, or if it’s because I miss my beloved English biscuits. I suspect it’s a bit of both, but in any case I thought I’d try to find out with a scientific* experiment.

Before we get to the details of the experiment, however, a run down of some of my favourite biscuits that are available in England, but not here.

Rich tea biscuits are very, very boring, and are the staple English biscuit. My Grandma always had these biscuits, and that’s probably the only reason I like them. They’re not all that good for dunking because they fall apart and collect in the bottom of the tea cup, but if you do manage to get a decent dunk, they soak up the flavour of the tea, and this the only way to make them even vaguely enjoyable.

There is a type of biscuit called Rich Tea available in Australia. These biscuits are quite different, and I discuss these below. 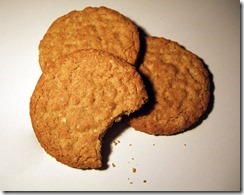 Hob Nobs are made by McVities, and they are the most amazing things in existence. Obviously, the only ones worth eating are chocolate Hob Nobs. They’re oaty and crunchy and delicious. In L.A. I was willing to pay up to $12 for a packet of Hob Nobs. Alas, they are not available in supermarkets here, and I’m not prepared to go in search of a British shop, so I have to go without.

Wafer biscuits are available here: vanilla wafers, chocolate wafers, and strawberry wafers. What is not available, however, are pink wafers: those wafer finger sandwiches with cream in the middle. They are bright pink and don’t seem to have any actual flavour other than simply pink. I remember them from play school, and I think that perhaps they are children’s biscuits, but sometimes children’s biscuits are the best! Which leads me to…

Oh yes! These are brilliant. They are definitely children’s biscuits because, well look at them. The main ingredient is, I think, food colouring, followed my sugar and then more food colouring. They come in a variety of flavours: pink, yellow, pinky-purple and fluorescent brown.

in essence, the actual biscuit is crap. It’s a very plain biscuit, but it is the brightly-coloured icing that makes them awesome. Definitely for children’s parties, but also a favourite at parties I went to as a student. I love the retro 80’s feel of these. But they just don’t exist here. People are also a little horrified when I describe them. I can’t imagine why.

I won’t go into too much detail, because these are a very basic chocolate sandwich biscuit. Similar things are available here, but they’re not called bourbons, and I think it is the name, rather than the actual biscuit I like.

Okay, so not really a scientific experiment, but rather an afternoon session of me sitting and eating biscuits. Now, I did actually do it properly: I put out the biscuits on a nice plate, made a pot of tea, and tested each one, considering flavour, crunch and dunkability.

Arnott’s in Australia is basically what McVitie’s is in the UK. Now for this experiment, I splurged a bit and I bought Arnott’s. I could have got Woolworth’s own-brand, but I figure these wouldn’t have been as good, and I might have been accused of not conducting the test fairly. I also bought a pack of Anzac biscuits made in-house by Woolworth’s, and Rich Teas by Paradise biscuits, as Arnott’s rich tea either don’t exist, or aren’t available in my local Woolie’s.

Like I said, I put the biscuits on a plate, as civilized people do, made a pot of tea (Yorkshire Tea, of course!), and sat down and started eating. Actually, it seemed rather daunting, the sight of all those biscuits, and knowing that I was going to have to eat them all. But first, a cup of tea to warm up my biscuit-eating muscles.

Nice aren’t particularly Australian, but they were included in the family pack of biscuits that I bought, so I thought I’d try them. They’re plain, but with a pleasing crunch. They dunk well, and the sweetness comes out when dunked.

Milk Arrowroots are very much like English Rich Teas, although they are oval instead of circular. They fall apart when dunked, and are an excellent option for a soggy biscuit.

This one definitely tasted chocolatey, which is unusual for commercially-produced chocolate biscuits that don’t have a chocolate coating or chocolate cream.

I don’t like Scotch Fingers really. They’re definitely Australian though. Essentially, they’re a shortbread biscuit, but not not nice like Scottish ones. These are very dense, and when chewed they sort of clump together in your mouth.

Sadly, they didn’t pass the dunk test either. There was no improvement to either texture or flavour by dunking in tea.

A very disappointing biscuit. This is clearly a children’s biscuit, and going on this one might think that Australians do not like children or want them to have fun. This doesn’t even come close to the Party Ring or even the Pink Wafer. It is very plain, hardly even sweet. It’s an unpleasant dunker, falling apart quickly and finding itself at the bottom of the cup. 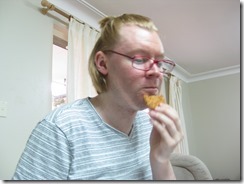 Now these are very nice biscuits. They come close, but not quite close enough, to Hob Nobs. They have a really good crunch and oaty texture, with a very smooth, buttery flavour. They dunk well (and from experience I know they dunk really well in coffee), and they hold their texture when dunked. 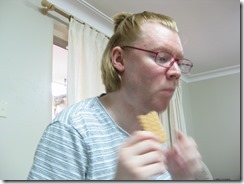 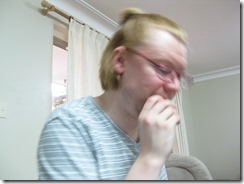 There is not much good to say about either of these biscuits. The milk coffee is very very plain, much like the teddy bear, but without even a fun shape. It totally disintegrated when I dunked it, and I had to fish out bits of it with a teaspoon.

The Australian version of the Rich Tea is very odd indeed. It’s completely different from the English biscuit. The texture is that of a tougher arrowroot, but it has a horrible orangey flavour that becomes really quite bitter, and dunking only makes it worse. It’s dotted with chewy currants too, which are really quite nasty. I will not be buying these again. 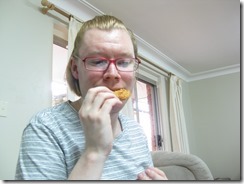 Anzac biscuits are most definitely Australian, and they are gorgeous! The texture is chewy, but oaty, and they have a really good buttery flavour. They’re made with coconut, but the ones I had today didn’t really have a flavour of coconut. They are, however, still delicious.

Australia may produce some dodgy biscuits that make me pine for a Fox’s selection tin, but all is forgiven with the Anzac biscuit.

I first heard about Tim Tams in 2009, and had an American licensed version of them shortly afterwards. They are really really nice, and not liking them is unAustralian apparently.

The thing they most compare to in the UK is the Penguin, although the actual biscuit part of Tim Tams is quite a bit softer, and the cream creamier. The only negative I have to add is that the chocolate is a little too sugary, but I should bear in mind that I had by this point already eaten a lot of biscuits, so my mouth was likely FULL of dissolved sugar. 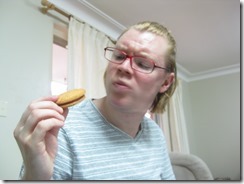 The Monte Carlo is really nice. It looks crunchy, but really it isn’t. The cream is almost marshmallowy, and the raspberry jam around the outside of the cream is a really nice surprise. The Delta Cream is a lot like an Oreo, but not as chocolatey. Actually it’s not chocolatey at all. The cream is also very sugary, and although it is supposed to be vanilla cream, it doesn’t have any flavour at all. Disappointing.

Now, I’m not really a lover of orange flavoured biscuits; it makes no sense to me, so it’s not surprising that I didn’t like these. That said, the orange flavour was not very strong. The biscuit had no real crunch either. A really disappointing biscuit.

The Kingston is a really very pleasant biscuit. It’s very much like two butternut snaps with chocolate cream in the middle.

The biscuit has a really good crunch and a pleasant oaty texture, and the chocolate cream was a nice surprise. It wasn’t that hard, flavourless chocolate cream, but rather almost like gooey melted chocolate. I could eat lots of these biscuits! 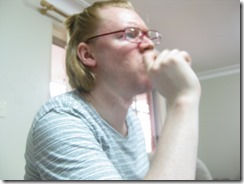 Honestly, these are horrible. They have no flavour whatsoever, and the texture is not pleasant. The shortbread is like soft sand, and lacks that buttery flavour that Scottish shortbread has. The cream is sugary, but has no clear flavour.

I’ll be avoiding these.

There are plenty of good things to say about biscuits in Australia, but I do miss my English favourites. My definite favourite out of all of these is the Anzac biscuit, but from the Arnott’s selection, either the butternut snap or the Kingston was in the top spot.

After all of these biscuits, I did feel rather sick, and I got a head rush from all the sugar, but I suppose it WAS in the name of research. And a tea party for one was a lot of fun!

3 thoughts on “Tea Party for One”